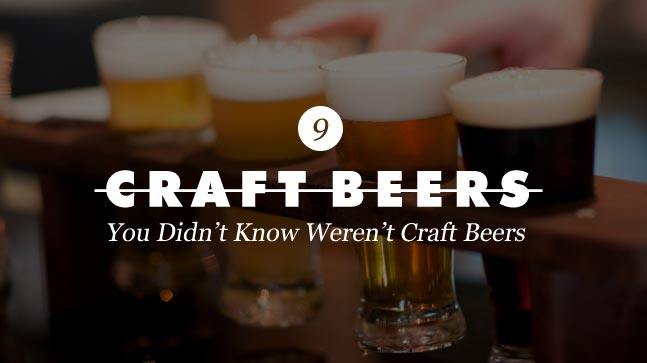 Is there really anything wrong with drinking a beer you think is a craft brew only to find out it’s not? No, not really. That said, if you don’t like having the wool pulled over your eyes and actually want to support smaller, independent breweries, you might want to be wary. The truth is, a lot of these supposed “craft” beers don’t adhere to true craft beer rules. Here are a few. Like many others, Redhook Brewing began as a craft brewery back in the 80’s. Since then, however, it has formed the company Craft Beer Alliance Inc. (with Widmer and Kona) and Anheuser-Busch InBev owns about 35% of the company. Redhook Goose Island is a bit of a sad one for us. The truth is, you can still get some really fantastic beer from them (seriously, go get your hands on some Sofie Paradisi and Bourbon County Stout), but a lot of the standard offerings are now outsourced. Anheuser-Busch InBev shelled out a cool $38.8 million to buy all of Goose Island back in 2011. Goose Island Blue Moon has taken a bit of heat over time because, while it almost always includes a slice of orange, it never includes mention on the bottle or can that it is made by MillerCoors. It’s part of a growing trend of the big companies trying to be part of the craft beer scene as slyly as possible. While refreshing and delicious, Blue Moon is definitely not a craft beer. Blue Moon Brewing Company Despite this Consumer Reports article that lists Shock Top as one of the best craft beers, it is in fact not craft at all. It’s an Anheuser-Busch product clearly aimed at inserting themselves into the craft beer market. Shock Top Beer Magic Hat had all the makings of a great craft brewery when it opened up shop in the early 90’s, but their story got a little fuzzy. It’s not that they were scooped up by MillerCoors or Anheuser-Busch, but rather they bought Pyramid themselves and enticed North American Breweries (the company that owns Labatt and a few other imports) to purchase them together. Magic Hat For a reason, see above. Pyramid Brew Sorry Leine fans, but your beer is about as far from a craft brew as they come. First of all, they’re owned by SABMiller, so you got that, but they also use adjunct ingredients for flavor enhancement (a craft no-no). We know they’ve been around for ages and deserve their props, but they’re not technically “craft.” Leinie Third Shift is a little more upfront about the fact that it’s made by MillerCoors, it says so in tiny letters on the labels. In fact, it’s their attempt at a foray into the craft beer world. Still, the limited availability and marketing make it clear that the folks at MillerCoors are seeing if they can give off a craft beer vibe. Third Shift Brewing If you’ve been to Hawaii, you’ve had a Kona. Actually, you can find them all over the place (36 states to be exact), not just on the islands. Why? Probably because they sold 35% of the company to Anheuser-Busch InBev (same deal that went down with Redhook). Kona Brewing Co