The first time I saw a Scion cruising down the road about 5 or 6 years ago, I thought “What is that?” It didn’t really impress me or impact me much at all, but I remembered the name Scion and I began to see the Toyota owned company grow.

Unbeknownst to me, I was not only witnessing a new outlet for modern transportation, but the beginning of a car company that gets it. A company whose main focus, besides bringing innovation to the design and engineering of motor vehicles, is to connect with the next generation of car owners. Scion is about people, not just nuts and bolts.

I’ve never had the opportunity to travel to California, so when I was offered the chance to fly out to Manhattan Beach and witness the announcement of the new Scion iQ, two things crossed my mind. “Fuck yes!” and “I know nothing about cars.” California has been a personal enigma, materialized by a gun toting Michael Douglas and a tar treading Arnold Schwarzenegger, so I was pumped to go. Scion set up base a few blocks from the beach, and held a meet and greet on the roof of Shade Hotel. Enjoying an open bar and free food, fellow bloggers shared backgrounds and their thoughts on the unveil—all wondering what tomorrow held. Satisfied and fed, I slept off my jet lag and prepared for a full day of workshops, presentations, food and of course, the highly anticipated test drive. The next morning we were met by Jack Hollis, Vice President of Scion, and escorted down to a cool showroom in the hotel’s parking garage. After a short introduction we were split off into 3 groups. My group remained in the garage and was intercepted by Paul Daverio, Kenny Jackson, and Korey Tsuno of Scion for the official walk around. The full tech specs can be found at Scion.com, but the highlights include its vast safety features, functionality and—my favorite part—the audio system. Being only a little over 10 feet long, this parallel parking messiah was made for city dwellers. It boasts a 160 watt pioneer stereo system, Bluetooth integration for Pandora radio, and 11 airbags, including a revolutionary rear window curtain airbag. As for gas mileage, it gets a steady 37 mpg (combined city and highway), making it more efficient than 75% of all current hybrid models on the market.

After our walk around we met up with Owen Peacock, Scion’s head of Marketing/Advertising. He discussed how the company plans to reach different audiences, with beautiful TV spots, print ads and a creative viral campaign that will be hitting the internet in the next few months.

The tour concluded with a presentation of a highly entertaining interactive 3D film and an introduction to the Scion iQ Museum Project. The project‘s goal is to spotlight influential cultural movements, moments and individuals from recent history. Scion plans to open exhibitions about the East L.A. Chicano punk scene from the late 1970s and early 80s, Detroit’s Strata Records, producer Prince Paul and rapper Big Daddy Kane. Centered around art and creative development, the Scion iQ Museum Project aims to preserve these underground artifacts as part of our cultural history. Finally, the test drive. Caravan style, we were paired in 2s and given an iQ to try out. This little beast drives like a badass go kart. It only took about 30 seconds before I felt comfortable to weave in and out of LA traffic like a baller. Blasting my shameful dubstep Pandora station via Bluetooth and cat calling—I felt like I could do anything. They supplied a set course, which was quickly disregarded in order to explore the neighboring mountains and coastal lines. It was fate that I ended up in a cul-de-sac surrounded by 3 ritzy mansions, which become the perfect location to check out the 12.9 ft turning radius… forwards and backwards. I won’t say I pulled the e-brake, but I won’t say that I didn’t. After the 30 mile test drive, we returned happy and fulfilled. This car is fucking fun and the stares of other drives made it clear that this small machine made a large impact on the road. Scion wrapped up the day with a community dinner in Shade’s courtyard, where none other than Devo’s Mark Mothersbaugh graced us with his presence. He gave us his take on the iQ (which was a positive one) and the source inspiration for his countless musical ventures.

For a “pure price” of $15,995, Scion leaves you with plenty of room to customize with the iQ’s 20+ additional accessories. Bottom line: forget the smart car, forget the mini—Scion iQ will lead the way in smaller, practical vehicles of the future. Get small. The Best Indoor Exercises to Stay Fit This Winter 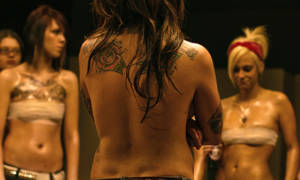