Ladies and gentlemen, grilling season is upon us. If you know us, you know that we consider grilling a sacred piece of American culture—just like boxing, baseball, and blowing shit up. Most of those things are pretty easy to do. But being able to throw down a solid rack of ribs? Well, that’s a different story. Good BBQ ribs take a tremendous amount of time, effort, and skill to get down. Luckily, we’ve got you covered with some recipes that will make the process far simpler. Here are 8 Award-Winning Rib Recipes for Your Next Cookout. This recipe is as real deal as it gets. These award-winning ribs from grill master Clint Cantwell are actual competition ribs, which means they’re purposefully over-seasoned and cooked to perfection more for the sake of judging than anything else. That said, they’ll also work wonders on your grill/smoker. Cantwell’s recipe calls for very specific stuff because it was perfected only after dozens and dozens of trial runs. You’ll see things like “I Can’t Believe It’s Not Butter,” as well as tablespoons of honey, specific methods of laying the brown sugar, a precise time of adding the apple juice, etc. But, as you can see, the results are worth the painstaking details. Recipe Bill Gillespie is a World Champion pit master, having won the Jack Daniel’s Invitational, as well as the American Royal World Series of Barbecue—two of the most prestigious barbecuing competitions in the entire world. This recipe, taken from his book Secrets of Smoking, will make your quest for the perfect BBQ ribs short and easy. It calls for both a rub and a sauce, and one look at it will tell you why: White and brown sugar, ancho chile powder, paprika, black and white pepper, onion powder, garlic powder, and kosher salt give the rub a distinctly spicy base, while the honey, molasses, cider vinegar, brown sugar, etc. in the sauce give you that tangy sweet you’re looking for. You can tell these babies are winners just by looking at them. Recipe No, you didn’t read that wrong—we’re about to show you an award-winning recipe for the best bison ribs you’ve ever had. This recipe also calls for a rub and a glaze, but what we love most about it is its simplicity. The rub is little more than cumin, a little lemon pepper, garlic salt, chili powder, and oregano. The glaze is a tad more complicated (but still plenty simple), with fresh garlic and onion, ketchup, vinegar, Worcestershire sauce, grainy mustard, and a little brown sugar to round it out. Recipe Chris Lilly is a legendary pit master, and this smoked lamb recipe might be one of the best things we’ve ever seen. In particular, it won Lilly Best Lamb Ribs and overall Grand Championship in 2012 at the Meatopia Bare Bones BBQ Contest and the Eat Real Festival in Oakland, California. First, we love the idea of smoked lamb ribs because they’re just so different than what you’d expect at a BBQ. Lamb has such a unique flavor to it, and this recipe calls for the kind of things that don’t just make our mouths water, but work specifically well with lamb. Think rosemary, thyme, dried oregano, olive oil, soy sauce, paprika, salt and pepper, ground ginger and much, much more. It’s delicious, yes, but it’s also something we guarantee you’ve never really experienced anywhere else before. Recipe We love award-winning recipes, but we get all teary-eyed when you give us an award-winning recipe that’s also incredibly simple. These award-winning ribs start with a simple dry rub of salt, garlic, and pepper—and nothing else. The sauce is another classic, and features ingredients like honey, paprika, chili powder, more garlic, Old Bay seasoning, a little celery salt, brown sugar, a couple other small things, and a can of beer—yes, the good stuff! It’s just a perfect recipe from top to bottom, and it’s super easy to toss together. Recipe This recipe doesn’t include a specific sauce, but instead tells you to choose your own favorite. Frankly, that’s generally our preference. The rub is a simple mix of chili powder, cumin, paprika, and salt and pepper to taste. That’s it. No fancy bullshit or unnecessary spices; just good old-fashioned BBQ ribs the way we all know they’re supposed to taste. Bring this one to any cookout and you’ll see why sometimes less is so much more. Recipe These ribs have won countless competitions for the author, and by the way they look, we get why. These guys care little about the seasoning and really place a lot of emphasis on the actual cooking methods, which is a new direction we don’t often see explored. Rather than sweat specific ingredients, they emphasize things like not rubbing the rub into the ribs, but rather gently dusting it, so as not to clog pores and trap in flavor. They also talk about the 3-2-1 method of smoking, wrapping, and basting, which is an industry secret that not many pit masters are willing to give up. This method is great for the DIY’er because it leaves the seasoning up to you. Just don’t skip a beat on proper cooking methods—and that’s more than half the battle. Recipe These bad boys gained their inventor some big wins at the Battle of the BBQ Brethren competition, as well as a fourth-place medal at the Hudson Valley Ribfest. Josh, the pit master responsible for the recipe, swears by “slathering” a layer of mustard onto the ribs before anything else, because it not only provides the ribs with a mellow “bite” after cooking, but also helps the rub adhere to the rib. The recipe also calls for apple juice, smoking wood, a little agave syrup and brown sugar, as well as your favorite BBQ rub and sauce. Any way you cut it, do us a favor and have a look at the picture—if you can keep yourself from drooling, we’ll pay up! Recipe The 7 Best Shower Beers To Always Keep in Your Fridge The Cult of the Big Green Egg 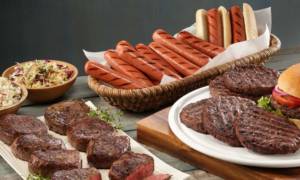 8 Recipes That Will Teach You How to Grill With Beer