The Western Front of the First World War was an unpleasant place, to say the very least. The chalky French soil would fall apart at the lightest rainfall, compromising trench integrity from the start. Belgian soil held water like a sponge, meaning you couldn’t dig without flooding everything with dark, peaty mud. Disease and vermin were rampant and soldiers were covered in lice. Then the war would restart and artillery shells would smash down, shattering whatever shelter soldiers and laborers had managed to construct.

Supply lines in Europe were reliable, but only up to a point. Railroads could only get so close to the front and horse drawn carriages and early 20th century cars weren’t enough to fill in the gaps. There were frequent supply issues that left soldiers to fend for themselves, usually spending what time they had scavangening in the many, many, many abandoned villages, farmsteads, homes, and villas.

Part of this need for scavenging came out of the army’s inability to predict and meet the evolving demands of trench warfare. When the men started hunkering down in the trenches, pillboxes, and dugouts, they encountered problems few soldiers ever had before, to the point where their standard issue uniforms didn’t measure up to the job. For example, the ubiquitous trench coat, an article of clothing so well-suited for the environment it was renamed after the war, was something soldiers had to purchase for themselves. 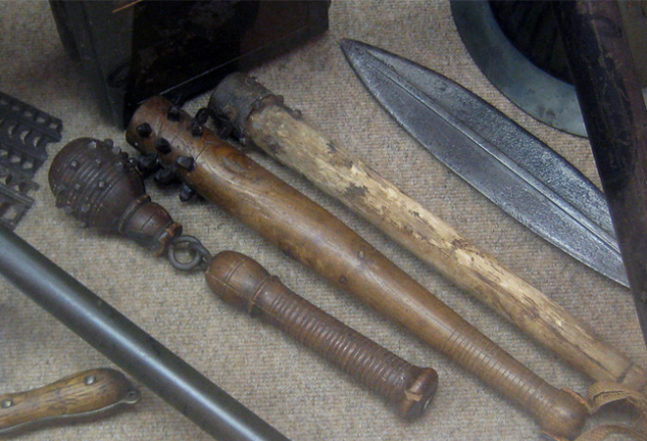 Some of the most iconic examples of trench improvisation were the weapons. Soldiers would cobble together maces, blades, clubs, bludgeons, firearm attachments, and explosives from whatever they had lying around in the trench, since that’s what the fighting often devolved into anyway. Improvised weapons could be anything from a simple nail stuck through a board to fully smithed knives made from scrap metal. Soldiers would also sometimes hammer random bits of metal into the end of wooden clubs, just to make their swing that much more damaging. A story of improvisation that gets passed around frequently is that of the Australian and New Zealand Army Corps (ANZAC) forces in Gallipoli. Their landing was ill-advised and ill-equipped and the soldiers knew it, so they took it upon themselves to improve their chances in anyway they could. One way was supplying their own grenades. Assembly lines of soldiers built hundreds of jam tin bombs to supplement an inadequate and dwindling number of standard hand grenades. For shrapnel, soldiers would pack the tins full of any kind of metal they could get their hands on, including nails, brass from spent shells, and bits of barbed wire. They would even copy a hand grenade’s design by packing explosives in a second, smaller tin, placing it inside the big tin and surrounding it with shrapnel.

Though, as much as people like to dwell on the ingenuity of the weapons, most of the improvisational energy went into making the trenches more livable. Before long, trench dugouts began to reflect the lives of the people in them, with souvenirs from battle, pictures of home, letters from loved ones, even wallpaper and electricity, especially as the war dragged on. By war’s end, soldiers on both sides, though German in particular, were living in dugout and trench complexes that would make some modern renters jealous. Only for the space though, not the constant threat of death by high explosive. 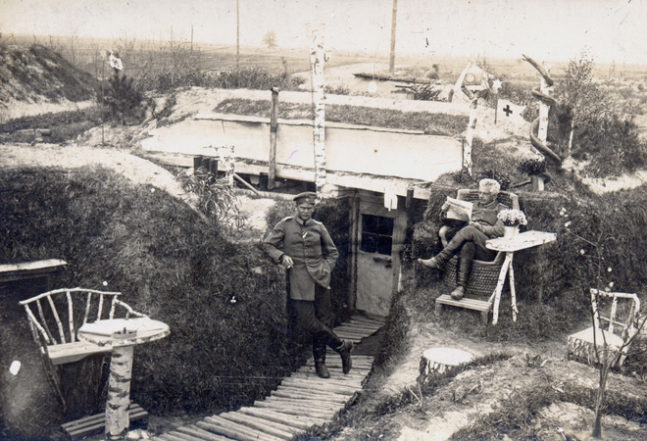 Soldiers had plenty of free time (even if you wouldn’t think of boredom being a major factor in the First World War), so small models of homes and towns began to pop up, as well as a vibrant trench art community, where soldiers repurposed spent ammunition, spare change, scrap metal, and souvenirs captured from the other side.

All of this is a really long way to say that if soldiers wanted to enjoy the amenities of home, they were going to have to provide it themselves, even in things as small as lighters. Lighters aren’t anything we’d think of as rare or hard to come by, but there soldiers didn’t exactly have a bodega they could pop into whenever they found themselves lacking a light for their cigarette. Or explosive’s fuse. Their solution was to piece a lighter together out of spent bullet casings, thereby creating the cartridge case lighter. The ones you’ll see more often, and the ones that have instruction videos on YouTube, are made from the British .303 round. Essentially, you’d need two casings, where one acts as a windscreen for the flame, while the other holds the cotton and fuel. You could slide the windscreen up, light the flame, put it to whatever it was you needed to ignite, then slide everything back into place. It’s arguably a better lighter than we currently have in gas stations and convenience stores across the country.

It’s also a testament to the stubbornness of the men in the trenches. They weren’t going to let a little thing like the German invasion of France stop them from eking out some creature comforts. They knew they weren’t going to get lighters from their high command, so they put their heads together and invented an ingenious way to bring themselves a bit more relief.

Want a trench lighter of your own? Pick it up in our shop.