Who doesn’t love a good story? Quite frankly, we can’t get enough of them. That’s why, to us, The Moth, a live series dedicated to giving ordinary people a place to tell their extraordinary stories, is one of the best programs ever. We’ve talked briefly about it before, but we thought it was about time we got into more detail. Launched in 1997, The Moth has given a critical voice to more than 18,000 stories, with topics including surviving life-threatening ordeals in nature, feeding drugs to rock and roll stars, going to prison, losing loved ones, escaping war and poverty, and beating cancer.

While it’d take us days to sort through the many thousands of stories to select our definitive favorites, we gave it our best shot. Here are 8 Moth stories every man should listen to. Charles Upshaw is a brilliant man who suffers from multiple sclerosis, a demyelinating disease that disrupts one’s ability to move. In this Moth Story, Upshaw describes his triumph over medical doctors and insurance companies as he struggled to qualify for participation in a trial study of a new medication that’d help improve his mobility. Most people walk thousands of feet every single day. But listening to this man describe what he went through to walk just 25 of them in under 30 seconds will change the way you feel about your life, and what human beings are capable of with determination, help from friends and loved ones, and just a little bit of stubbornness. Listen Given the freedom to leave Baghdad and work for the U.S. government as a translator, Abbas Mousa returns home for a few days to see and spend time with his family. On his way back to the airport after his visit, he is the victim of an attempted Al Qaeda kidnapping. Mousa’s story is horrifying and demonstrates man’s courage and resilience in the face of peril and what you have to be willing to do to survive. Listen You already knew this, but Lance Armstrong was kind of a dick. He used illegal performance enhancing drugs, lied to his fans, intimidated people who spoke out against him, and will be forever pegged a disgrace to cyclists everywhere. But what about David Walsh, the veteran sports writer largely credited with calling Armstrong out for doping, at a time when Armstrong’s incredible notoriety and inspiring story made him a god among athletes? In this Moth story, Walsh discusses the hateful vitriol he experienced from everyone—editors, cyclists, readers, and even Armstrong himself—in the days following his first accusations. He touches on the loss of his son, the aftermath of his reporting, and his eventual vindication. Listen Tony Birch tells us a story about adolescence, love, and the beautiful brown-haired, brown-eyed Italian girl who worked in her father’s fruit shop. Birch’s attention to detail as he describes the girl and her leather apron-wearing, stern-looking Italian father; the schoolboy fight at the tram stop; and the school dance debacle makes this story connect with audiences on a deeper level, and that’s precisely why it makes our list—we all remember our childhood love. It’s a story that will, at the very least, make you smile. Listen Ready or Not – Carlos Kotkin

For some, fatherhood is a crowning achievement that becomes the proudest moment of a man’s entire life. And others are scared shitless by it. Carlos Kotkin tells us the story of his experience with child rearing, the two-month-early birth of his daughter, and how she and his wife had planned for literally none of it. The most fascinating thing about being a dad is that it truly does change the way you see both the world and your place in it. But the most fascinating thing about this story is—whether subconsciously or consciously—Kotkin’s entire voice and demeanor changes after he gets to the part where his child is born. Is this story a giant perpetual “Awwwww dad!” moment? Absolutely. But even if you don’t yet have children, it’s an excellent one to listen to. Listen 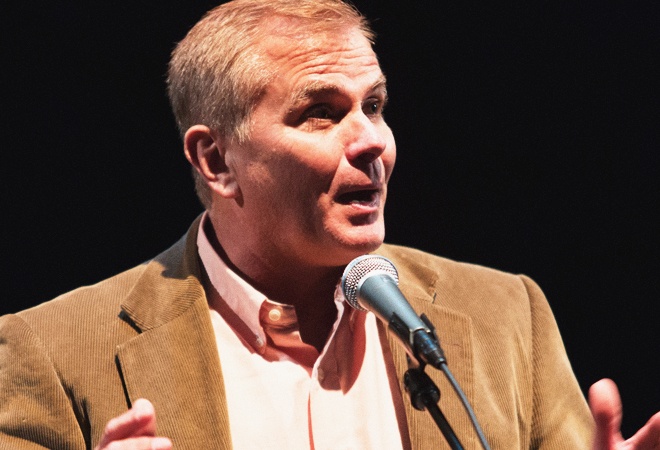 Fred Johnson opens this story like this: “When I walked out of the Jeffersonville City jail, I knew one thing for certain. My wife was going to be pissed.” Johnson is a goddamn man’s man if we’ve ever heard one, and his story hits all the beats of a good masculine tale. There are tributes to fallen friends, some bourbon, a botched suicide attempt when he wanted to join his friends in Valhalla, and triumph in the face of seemingly insurmountable odds. Johnson’s story deals with PTSD, something that affects combat veterans every single day, in an entertaining, emotional way. The segment is a compelling narration of the life of a man who struggled with the horrors of war, and the triumph he experienced after facing his demons head on.  Listen My Place is Rock and Roll History – Gordon Edelstein

When you think about sex, drugs, and rock and roll, R.E.M. probably isn’t the first band to come to mind. That’s exactly what makes this story about how Gordon Edelstein gave R.E.M. guitarist Peter Buck the sleeping pills that led to his infamous 2001 British Airways arrest so damn good. Edelstein talks about how he went out to London in the days leading up to Buck’s trial, and the sober terror of the trial and knowing that his testimony could very well have a massive impact on the history of rock and roll music. It’s a completely absurd story and an important reminder that you probably shouldn’t share your prescription drugs with other people. Listen

(Spoiler: Everything ends up OK, and nobody goes to jail for anything.) The Spy Who Loved Me – Noreen Riols

You’ve probably never heard of Noreen Riols, and that’s likely intentional. During WWII, Noreen Riols joined the Women’s Royal Naval Service, or at least, she tried. Before she could work for them in any significant way, she was recruited to be one of Churchill’s infamous Secret Agents. She describes her time in the debriefing sessions with agents returning home, her time in training, the intricacies of communicating with other agents, and the lengths they’d go to ensure their own safety in the field. She talks about how she was trained to trick agents into divulging information to her. Perhaps most importantly, she talks about meeting and falling in love with another agent, the details of which are absolutely incredible and more than a bit heartwarming. Listen