Seriously, Russia, WTF? Due to a high rate of insurance scams and the fact that many citizens believe traffic cops are corrupt, plenty of Russians have installed dashboard cameras in their cars. But why do so many bizarre things get captured on them? Trucks spilling cows, half-naked dudes running from the cops, and a slew of other assorted oddities seemingly get posted from these cameras on a daily basis. Here are the craziest.

Half Naked Guy on the Run

We’re not sure what this guy’s endgame was, or whether he just had a bit too much vodka, but running across the hood of someone’s car isn’t a great idea. He probably knows that now. (Link)

If you get in an accident with an 18-wheeler and you’re thrown through your dashboard, you’re probably gonna get hurt or worse. You definitely aren’t going to just casually get up and walk around, right? (Link)

Scams like this are good enough reason to install a dashboard camera. Of course, this dude’s acting skills are up there with the likes of Paris Hilton and a stick. (Link)

How to Fool Traffic

What sounds like a brilliant idea you’d have while stoned is actually happening in this video. What do you do when there’s a monster traffic jam and you need to be on your way? Just let some of these brainiacs show you. (Link)

Not only are the folks over in Russia seemingly fearless, so are the animals. These two dogs just couldn’t fight the urge to get it on . . . even if that meant on a busy roadway. (Link)

The ole dash cams were in full effect when a meteor exploded over the country back in February. While there aren’t any great dashboard camera videos of the sonic boom shaking everything, these vids give a solid idea of just how nuts it must have been to see this. (Link)

Drunk Guy on a Shopping Cart

No matter how drunk we’ve been, a small part of our brain advised us against doing something beyond stupid. Sure, lots of dumb things happened, but we never thought riding a shopping cart around on a busy highway was a good idea. (Link) The 9 Best Cask Strength Bourbons Under $100 The 5 Coolest Watches We Had Our Eyes On This January The 7 Best Bourbons You Can Find Anywhere For Under $50 Tips and Essential Books To Live a Happier Life Through Stoicism 100 Essential Movies Every Guy Should See 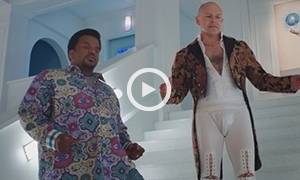 Making Your Own Pen Cool Material’s Day at the Track