We’ve all fallen for it at some point. You’re walking around the boardwalk, poundin’ down some vinegar fries, and suddenly, you see it. Like a beacon in the night, a bright booth, lit by a flashing phrase. Something like, “Knock ‘Em Down, Win A Prize!” The portly fellow standing in front of it beckons you to come closer and try your luck. Mesmerized, you watch schlub after schlub tossing beanbags into a stack of milk bottles, trying to knock it down, never quite getting it. Their girlfriends look on, each more broken hearted than the last.

You walk up, throw five bucks on the table, and tell the guy to give you some bags. Smirking, he hands you three hefty beanbags. Looking him dead in the eye, you take the first bag and obliterate the pyramid.

He yells, “I don’t believe it!” Laughing, you collect your prize, hand it to your girlfriend, smack the carny, and yell “SHOTS FOR EVERYONE!” You’re not at a bar, but it’s the thought that counts. You turn to leave, and the guy asks, “But wait, how’d you do it!?” You look at him and say, “I read something on Cool Material.”

Here’s how to beat all those rigged boardwalk games: 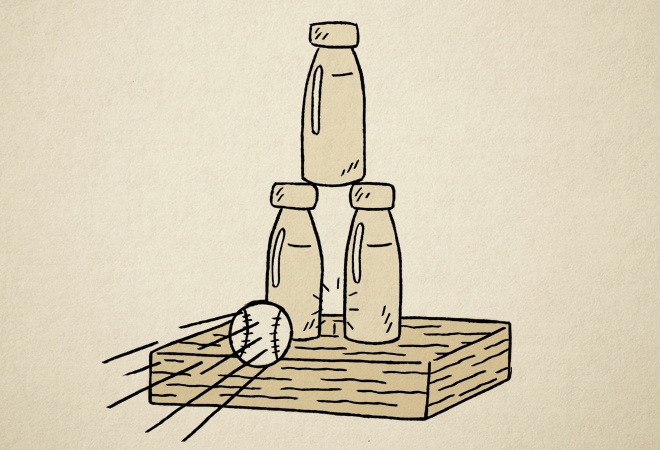 One of the oldest boardwalk games in the history of boardwalk games, Milk Bottles has lined the pockets of arcade workers since day one. It looks easy peasy, but takes some real, actual skill to take down. The trick here is that, most of the time, the bottles are weighted differently. The lightest bottle is on the top, and the two heavy ones are on the bottom. Aiming for the top bottle won’t do anything for the bottom two, and aiming for all three (a perfect center shot) might not carry enough force to knock the two bottom bottles over. Sometimes, they’ll arrange the bottles in a way that makes them slightly off-keel or separated. The idea should be to identify the weak point—usually right between the bottom two bottles—and then send a fast and heavy one right between them. This one isn’t rocket science, but does take accuracy, force, and a little skill to identify the weak spot. The goddamn ring toss. It seems easy, right? Toss a ring into a plain of bottlenecks, drop it over a bottle, and win a huge prize. It’s in the bag, baby! In actuality, you’ll notice the prizes at the ring toss booth are usually the most valuable ones in the boardwalk, because it’s probably one of the most difficult games there. The odds of winning—even when you know how to play—are pretty slim. Nevertheless, here’s how it’s done:

The name of the game here is trajectory. Don’t flip the rings like coins, and don’t lob them onto the board. Try to put a little spin on them and toss them low and horizontally. Just pretend each ring is a little Frisbee. Don’t aim for one particular bottle. With enough spin and a horizontal trajectory, the ring may very well get hooked on one bottle then bounce off onto another. That’s your best bet. 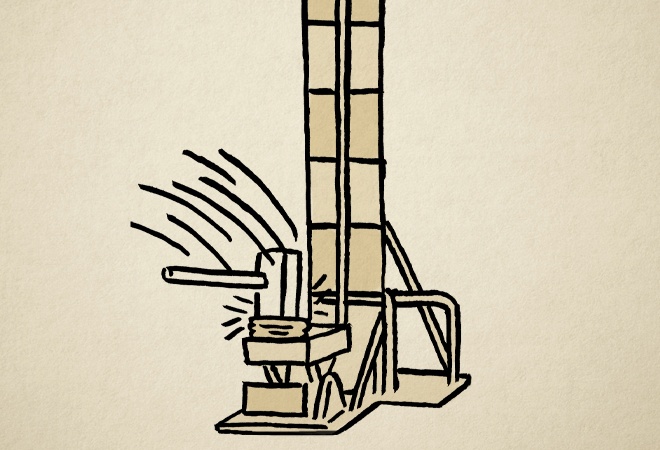 We love this boardwalk game because, contrary to popular belief, it’s less about strength, and more about skill, accuracy, and discipline. The trick with this one is to focus on the direct center of the pad. Keep your shoulders square with your feet and perpendicular to the pad. When you come down on the pad with the mallet, make sure you’re swinging through it—don’t focus on hitting the pad, but rather the floor underneath it. A well-placed, precise shot that lands square, level, and center has a way better chance of knocking the bell than a blind smash, even if there’s more force behind it. There is probably no boardwalk game on the planet more infuriating than the old Ball-In-Basket. The premise is simple. Take a ball and throw it into a basket. The end. Except not. The Ball-In-Basket game takes some basic skill and some understanding of physics. Once you get the technique down, you’ll be able to sink any basket on the planet.

The biggest mistake rookies make is throwing the ball head on into the basket. That’s amateur hour. To win, you can do one of a couple different things. The first one is using the edges of the basket to slow the ball down and cradle its way in. Gently lob the ball into the left or right side of the basket, gently enough so that it rolls down the side without hitting the bottom and bouncing out. You can also put some counter-spin on the ball to drastically slow it down when it makes contact with the basket. Another way is a little more difficult, and involves tossing the ball toward the roof of the basket. It will bounce off the roof, hit the bottom, bounce into the back, and hopefully won’t have enough momentum to bounce back out. 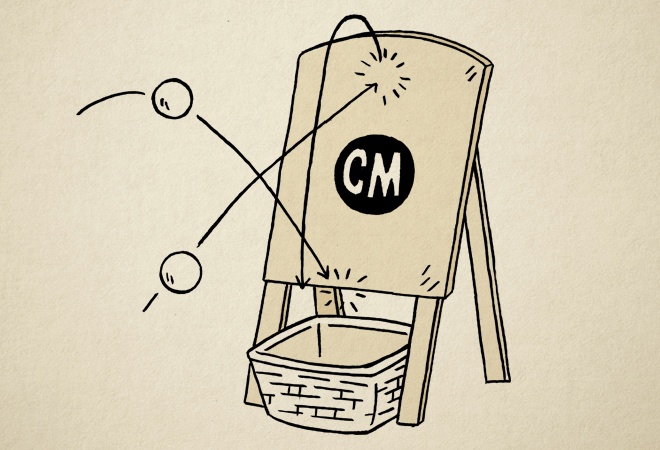 Flukey Ball is a lot like the Ball-In-Basket, except instead of throwing a ball directly into the basket, you have to bounce it off of a screen right above the basket. If the game sounds impossibly difficult, it’s because it is. We don’t recommend wasting your money on it, but if you’re feeling froggy and want to jump, here’s your safest technique:

Because this game varies from spot to spot (different board heights, ball weights, and board tilt), it’s tough to recommend exactly what you should do. One thing that helps no matter the circumstances is front spin. The front spin ensures that the ball won’t gain too much speed, drop into the basket and then bounce out. The other thing to consider is location. Never hit the center of the board, as that is the bounciest area. Always go for either the top or the bottom—that all depends on the angle of the board. 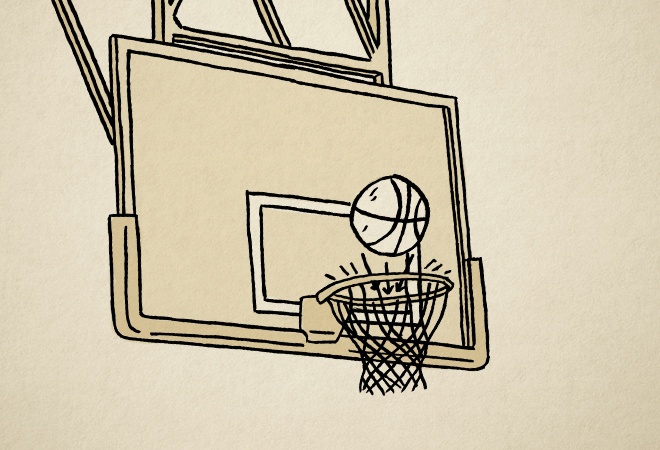 This game takes so much skill and training that you should be able to major in it in college. The tip here is don’t shoot for anything other than net. Balls are usually over-inflated and rubber, backboards are composed of a harder material, and rims are shaped differently, all to make things more difficult. Use a higher arc, aim for the bucket, and hope for the best. One thing you can also do is get to know the ball beforehand—feel it, dribble it a bit, and get to know its weight and level of inflation. Other than that, this game isn’t about rim, backboard, or anything else—just net. 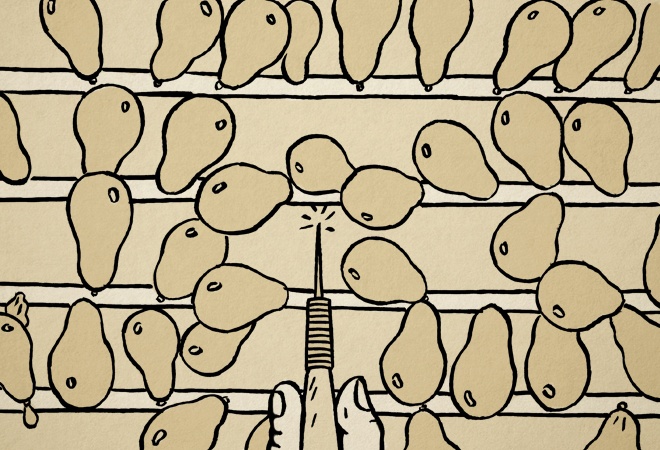 This one typically appears as a game of luck over skill, and that presumption isn’t necessarily wrong. However, you don’t have to be a world-class dart thrower to win. Here are two things to keep in mind:

One: Don’t forget to check the sharpness of the dart you’re about to throw. They’re never going to be razor sharp, but they shouldn’t be so dull that they’re bouncing off the balloon. If they are, ask for different darts.

Two: The balloons are most likely going to be underinflated, so make sure you’re putting some pepper on your throws. No pussy-footing or gentle lobs here. Choose a target and go for it. 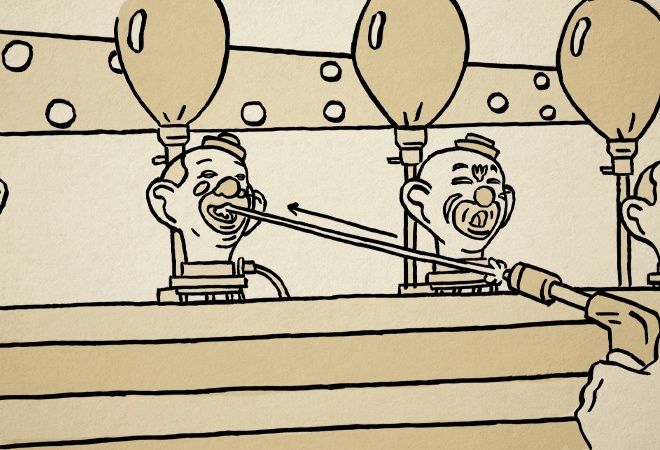 The Water Gun Race is one of our favorite boardwalk games, if for no other reason than we love shooting things. First, it’s important to understand that if you’re sitting down with a row of other players, the fewer players there are, the better your odds of winning become (duh). As far as the game itself goes, there are a couple things you do to gain an advantage. First, lean your gun as far as you can on the table. This is a game of accuracy and timing. If your stream of water hits the target first—even by a fraction of a second—it could mean the difference between winning and losing. Additionally, always keep your hand on the trigger. Never wait for the bell to begin to start “firing.” Pull the trigger before, so that as soon as the water goes on, you’re blasting. Finally, stick around for a game and try to observe the water pressure coming out of the guns. Are you going to need to aim it a little higher to account for trajectory loss, or is it a straight shooter? The sooner you find your target—and stay on it—the more likely you are to take the W.