Every couple of weeks, we’re bringing you a roundup of vintage wheels on the auction block that we’re obsessing over. 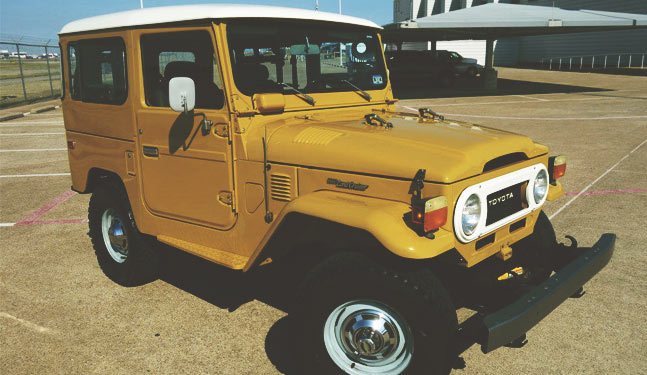 Arguably one of the best looking 4x4s ever, this 1976 FJ-40 was meticulously restored in 2006. Underneath the white top and correct Mustard Yellow enamel sits an all-business off-road vehicle. Interior design is spartan and contains only the essentials. Power comes from a 135hp in-line 6 driving restored original factory wheels. Current bid: $19,000 This is it, the epitome of the Defender. This Slate Blue 1961 comes equipped with both hard top and canvas soft top making it the perfect companion for outdoor adventure. Inside this right-hand drive model is front bench seating with side-mounted seating for rear passengers. Take a look under the hood (and spare tire) and you will find the correct diesel 4 cylinder turning factory white steel wheels. Current bid: $9,999 Beginning production in 1959, this second year 3000 would eventually become known as the Mark I and is an award-winning example of British sports cars. Painstakingly restored in 2013, this 3000 features original Colorado red exterior paired with black interior with red piping and removable soft-top. The twin carb, in-line 6 under the hood was capable of 115 mph top speed and zero to 60 times in the high 11 seconds. Buy it for $60,000 With an unusual history, this Daytona actually began life as a European market and specification coupe with the highly coveted Perspex covered headlamps. Undergoing several transformations, this Spyder conversion was recently updated to its current “Fly” yellow and tan interior in order to match the original Daytona Spyder prototype. Buy it for $895,000 Sure, vintage sports cars are cool, but vintage factory race cars? They’re even better. This very rare Lotus Elite factory race car is in perfect condition. Details are limited, but it features full race set-up including roll cage and vented, plexiglass windows. Under the hood is a 4 cylinder with what looks to be side mounted dual Weber carbs. Current Bid: $28,000 Back in the 1950s, Volvo wanted to create a sports car. But after failing miserably with their first attempt, the P1900, Volvo hit the nail on the head with the P1800. So much so that Roger Moore piloted a 1962 P1800 as Simon Templar in the TV series The Saint and later purchased one for himself. Originally slated for restoration, the 30 year owner of this 1967 P1800S opted to leave it in original condition. And while it could use a little TLC, this is a unique opportunity to own this piece of Volvo history. Buy it for $15,000 Still operating today, Greeves Motorcycles LTD. primarily manufacturers for the off-road market. This restored 1968 Challenger is a rare example designed for motocross and features a 250 cc engine mated to a 4-speed transmission. Also includes a very interesting front suspension set up as well as factory manual. Buy it for $5,500